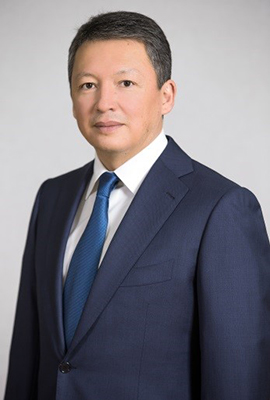 TIMUR KULIBAYEV
Born on September 10th, 1966, the city of Alma-Ata.
In 1983 he graduated from the Republican High School specializing in physics and mathematics.
In 1988 he graduated from the Moscow State University named after M.V. Lomonosov, majoring in National Economy Planning with a degree of economist.
Holds a Ph.D. in Economics (1999). In 1999 he defended a PhD thesis on “Improvement of organizational-economic management mechanism of enterprises in conditions of market economy (oil/gas industry)”.
He is an author of numerous publications and inventions.

Memberships in Boards of Directors of Kazakhstan companies:

National and Jubilee Awards of the Republic of Kazakhsta:

Awards of the Russian Federation: