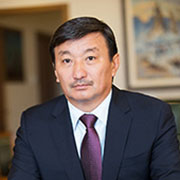 Born on November 21, 1961 in the city of Shymkent, South-Kazakhstan region.

Education
A graduate of the secondary school № 1 of Shymkent city (1978);
In 1985, he graduated from the I.I. Mechnikov St. Petersburg State Medical Academy with a degree in health care organization and management;
In 2003, he completed extramural studies at the T. Ryskulov Kazakh Institute of Economics in Almaty majoring in public administration;
In 2004, he successfully completed the specialized training course "Master of Petroleum Businesses" at Eni Corporate University in Milan, Italy;
In 2005, he graduated from the Diplomatic Academy of the Eurasian National University in Astana, qualification - International Relations.